Data is a dangerous thing, and so-called Big Data even more so. But even where the figures are untrustworthy, the underlying message they tell can be interesting. 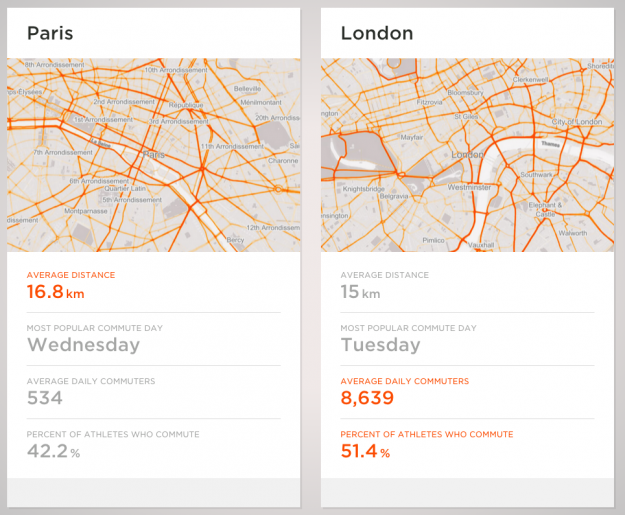 One of the chief attractions of the Strava smartphone app – at least for some people – is its ability to share data. Personally, I’d use the term ‘over-share’, but some people seem to like comparing their own performance against others.

What this means is that Strava hoovers up huge amounts of data about its users (or ‘athletes’ as it likes to call them – another reason I don’t use the app). I presume that the company makes a lot more money from selling this data than it does from selling the app, but at least it shares a small amount of it publicly.

At Strava Insights, the firm provides an analysis of 136 billion data points gathered from walkers and cyclists in 12 cities around the world. It’s not particularly profound intelligence – indeed, one assume it’s mainly there as a clickbait marketing tool more than anything (in which case, it’s worked). But one of the subsets is about cyclists who commute.

I’m not clear on how they determine the difference between a commute and any other type of ride – maybe this is clearer if you actually use the app. And this data has to be taken with a huge pinch of salt. For one thing, it’s self-selecting: I suspect that Strava is used by a particular kind of cyclist (fitness freaks, competitive types) and not by very many others – such as anyone who doesn’t give a damn about how far or fast they ride. What percentage of bikes do you see that have cycling computers on them? What small subset of people who like to record this data are using Strava? I think this data is gathered from a tiny and non-representative portion of the commuter cyclist community. And that means two things.

The specific numbers are mostly worthless. The massive difference in number of commuters between Paris and London, for example, could be accounted for by cultural effects, such as fewer cyclists being ‘athletes’. So we shouldn’t see these numbers as counting cyclists, but as counting Strava users – which is very far from being the same thing.

At a more abstract level, though, the numbers are interesting – and for the same reason. The fact is, to get any idea of the actual number of cyclists, you would have to multiply these numbers – possibly by quite a large number. Like I said, what percentage of the cycling population uses Strava? I suspect the figure is even smaller for commuters, for whom the bike as transport is more important than as a tool for a workout. So the real numbers are going to be much bigger, which is encouraging.

The other figures are arguably more indicative. Both Strava and non-Strava cyclists may have similar distances to commute. Perhaps athletes are prepared to cycle further than normal people, so the numbers could be skewed that way. But, on the whole, your level of fitness isn’t going to have a huge impact on where you live and where you work.

And the most popular day? That’s interesting. I’m not sure what happens in Paris, but in France generally, many businesses (mainly retail) are shut on Mondays, which could affect the stats. So this selective sampling suggests that, on the first day of each working week, some commuters look at their bikes and think, “I’ll get the bus.”