We’re very lucky. Not only do we live close to two of France’s major cycle routes – the Vélo Francette and the Véloscénie – but those routes also spend much of their time near us on voies vertes, or greenways. 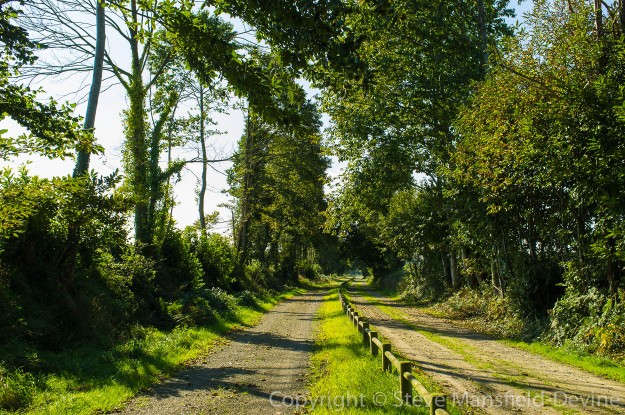 Technically, a voie verte is a route from which motorised traffic is banned. It’s reserved for walkers, cyclists (including people like us on e-bikes), roller skaters and skateboarders (never seen either) and wheelchairs, with some stretches also available to horse riders. There are also pistes cyclables which are routes intended primarily for cyclists. You’ll often see a voie verte marked on IGN maps as piste cyclable – in rural areas the two terms are pretty interchangeable and the two routes are actually the same track (the significance probably lies in sources of funding and local authorities’ requirements to create cycling infrastructure). In towns, a piste cyclable designates a bike route that is physically separate from the main road.

Many of these voies vertes are former railway tracks (others are on coastal paths, river and canal tow paths, and forest and park tracks), and you can often find evidence of their original use – sometimes as station houses refurbished as private dwellings, but also as gates leading to nowhere, or rusted signs half-hidden in the brambles. I’ve always had a fascination for this form of industrial decay. 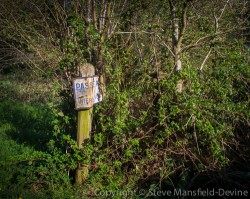 I’m also fascinated by the traces that humankind leaves in the landscape. And this is the basis for a number of related landscape photography projects that I will soon be blogging about at The Layered Land. These pictures will form the basis of a series of books and exhibitions, one of which will be dedicated to the voies vertes.

Not all of the cycle routes are on greenways: they also take to voies partagées – shared routes – at times. These are generally quiet country roads. But like I said, we’re lucky…

Our local town of Domfront, in the Orne département of Basse Normandie (Lower Normandy) is where the two major routes cross. On the east-west Véloscénie, which starts in Paris, it marks the start of an unbroken voie verte stretching more than 70km to Mont St-Michel. On the Vélo Francette, which runs 630km from Caen to La Rochelle, there’s a 23km greenway going north from Domfront to Flers, part of which we rode recently. Or we can drive 15 mins south and pick up a voie verte that starts on an old railway track in Ambrières-les-Vallées and later switches to the towpath of the Mayenne river, in the town of the same name. In total, it stretches 174km south to Lion d’Angers, not far from the Loire river.

These are the sections that will form the core of the book and exhibition project.