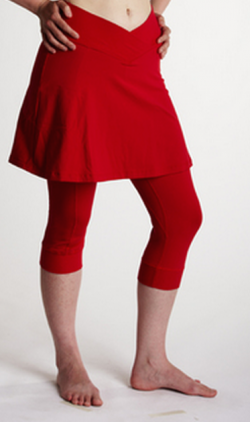 Having ordered Sheila Moon’s winter tights and Artemis skort and found them fabulous but rather long, I decided to order the shorter knickers and Isis skort (basically the knickers with a skirt attached), figuring that at my height of 5’1″, the knickers would be more like a tight on me.

These knickers and skort are made from the same brushed supplex nylon as the first batch of items I bought, and have the same soft, cuddly feel. However, the legs end in a wide band of soft fabric rather than a zip and reflective strip.

Once again, the skort section is a good length, which not only provides some modesty but an extra layer of warmth and rainproofing in winter. The yoga-style waistband is extremely comfortable, as is the chamois, to the extent that I’d be happy to wear these for yoga practice.

When the tights and skorts (in red and black) arrived, I was a bit disappointed by the look of the calf band, which is quite bulky and sticks out, looking rather inelegant (not something I need any help with, thanks). But they are extremely comfortable and non-binding, so all is forgiven.

During the months of September and early October, I’ve found these shorter garments very useful for in-between days. With ankle socks, they’re quite cool to wear, and if I need more coverage, I just wear a longer sock (the Woodlander from Corrymoor).

Sheila Moon has now closed, but garments are still available while stocks last from her website and various retailers such as Team Estrogen.