My new helmet has arrived – this gorgeous Sawako in pink.

I’ve wanted a Sawako helmet ever since the idea of cycling began to take root. I love the built-in peak and the visually lightweight styling that stops you looking so much like a big-headed alien when riding around.

Sawako herself is a London commuter cyclist who came up with her own range when she couldn’t find what she wanted in the shops, and I think it shows. These are not products designed by committee – designs range from leopardskin to crocodile to flowers to sprayed-on iridescent glitter, and they meet European and UK safety criteria.

But I wanted a pink helmet, for the reasons hitherto given: it’s the best standout colour against green (by which we are surrounded here in Normandy) and I want to be noticed as the woman cyclist in pink around the neighbourhood, so that people watch out for me.

Also, here in the bocage, the ‘fosses’, which are actually banks, not ditches, can easily be several feet high, even when the trees have been removed. The effect is that you often ride on a road that is a bit like a tunnel and I’m aware that the top of my head may well be the first thing a driver sees of me as I proceed along a hedge or fence line.

I’d kind of decided, though, that I just couldn’t afford the 95 euros that a Sawako would cost, just because it looks prettier, so I put it on the back burner and instead, I got this one for a tenner on Ebay. 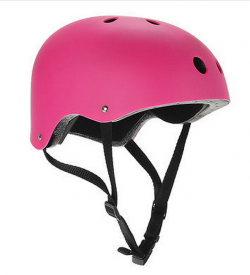 It’s OK kinda sorta and I prefer this skateboard style to the very aggressive roadbike helmets that are the only thing available locally, but it also freaked me out slightly that it arrived from China in a bag, not a box. What might it have gone through in transit? Could there be invisible cracks about which I know nothing, rendering the whole thing useless?

I also instantly missed having a peak, as I always wear hats with brims to shade my eyes. Also – something I wasn’t expecting – it was too big. I do have a preternaturally small head and often have trouble finding hats to fit, but I checked the size quite carefully before it arrived, so it should have been OK. However, there’s no way of adjusting it, and I had to wear it with my Sheila Moon Eurocap just to get it to stay on my head.

All in all, it was a mistake, but then suddenly the pink Sawako hove into view, and at a very affordable £54.50 from Cycle Chic.

It is, basically, exactly what I’m looking for. I could do without the blue design, but from a distance, really, all you see is pink, which means it goes with all my pink high-vis very nicely.

It is also – vain although this may be – much more flattering, with its more low-profile, streamlined design and black trim. I still look like a dweeb, but perhaps not so much of one.

This hat can also be tightened by a dial at the rear, ensuring a nice snug fit.

On the road, the helmet performs well and I feel a lot less self-conscious in it. The lower profile results in a lot less wind noise, and the peak, although not as useful as the one on my Eurocap, does shield a bit from glare.

Above all, though, I feel much prettier in it, which was the main consideration in actually buying it, so job done, I reckon.

Wonder how it would look in orange?…..