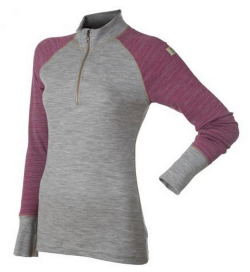 When we first began cycling, I’d envisaged that my base layer for my top half would be my Eddy tees from Finisterre.

I love these things, and have over a dozen. In ultra-fine merino mixed with polyamide, they’re flattering, and perfect for my life of desk work, dog walking, cooking and general outdoor but not too messy stuff (for yard work and cooking I also wear aprons).

But they are are proving rather chilly around the neck area now that the temperatures are dropping a little (we had our first frost this morning, so I decided to get a few dedicated cycling tops. 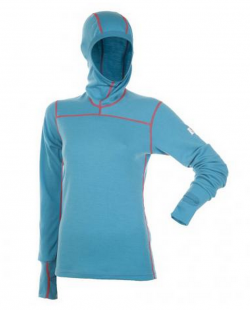 Janus is a Norwegian brand known for its high-quality merino garments, which are designed for general outdoor use rather than specifically for cycling. At around 75-85 euros for a top, they are rather more expensive than Eddies, but feature a cut that is more useful for the bike.

Up on the hills around us, it’s already pretty nippy and I’m feeling the lack of a buff (my trials of scarves haven’t been at all successful, as they just come unravelled), so I opted for these two high-neck designs to try out the brand – the Designwool long sleeve zip neck, and the Sportwool hoody. The Designwool is a rib weave while the Sportwool is an interlock, and both are 100 per cent merino rather than a blend. 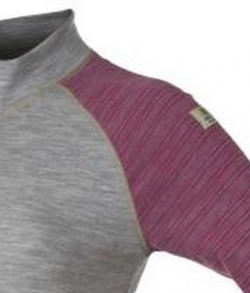 As you can see, the Designwool zip-neck has raglan sleeves, while the Sportwool hoody has a set-in sleeve. Why the difference, I don’t know. The colours were simply a question of what was available on Sport Pursuit, which is where I bought them at 66 per cent off, but they incorporate my favourite three colours of grey, pink and turquoise.

Sportpursuit is a sales website and savings can be considerable, but you have to wait until the end of the sale before they despatch the goods. That meant a four-week wait for these particular items.

The first item I tried was the Designwool zipneck. This is an attractive garment, with a sturdy metal zip, and a zip windshield and garage. The cuffs and neckline are double, which makes them nicely snug, and the weave on the rest of the garment is very thin and fine. Janus doesn’t publish the weight, but the fabric is slightly see-through, so I’m guessing around 150gsm. 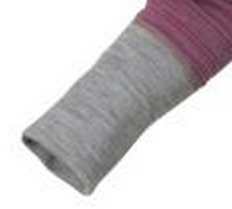 I wore this garment when my bike was off the road, so I haven’t road-tested it yet, but it was very comfortable and non-scratchy so I expect it to perform well. I was especially taken with the long double cuff, which folds back to give four layers of fabric on the wrist – very warming.

The hoody, though, is something I wish I’d bought several of. I have other hoodies from Finisterre (the Eddy longline and the the Fiske) but those have a big, loose hood with a drawstring, and a relatively low neckline. The Janus Sportwool hoody has a high neckline that comes up to the throat crease and the hood is small, like a balaclava, with no drawstring. This makes it very snug around the head, especially the ears – perfect for the bike. 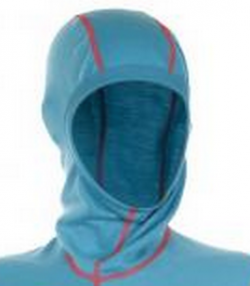 The fabric on the hood is single-layer with an edge seam, whereas the Finisterre items have a double layer that is very warm. It may be my imagination, but the interlock Sportswool fabric on the Janus garment feels heavier weight than the Designwool and has no show-through. I might guess it was approaching 190gsm. The pink flatlock stitching adds an attractive detail and the multiple seams make a nice pattern. This absence of a seam on the top of the shoulder (they have been moved to the collarbones and shoulder blades) would help obviate chafing for anyone carrying a backpack. The long cuffs are double and have horizontal thumbholes, which I found more comfortable than the usual vertical type. 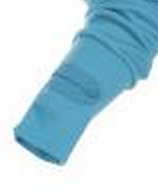 I wore the hoody as a base layer today, first to go swimming (in 9-degree weather), where it was invaluable to walk back to the car with damp hair, and later that day put I in a couple of 11km rides – one on the voie verte and one on road.

On the voie verte I wore it under a poly stretch jersey from Sheila Moon and had the hood up, under a padded fur-trimmed hat. My head was warm enough but my body was cold, partly because I had to keep my speed down as I was running the dog. In the shade, at 14 degrees-ish really felt the need of an extra wind layer.

Out on the road, with temperatures dropping a bit towards evening, I wore my high-vis Karrimor running jacket over the poly jersey, to provide a bit of wind protection, and since I was also pedalling harder, I was nicely warm in this three-layer setup. I had to tighten my Sawako helmet a couple of notches over the hood as I normally wear a fleece balaclava that is considerably bulkier. It all worked very nicely, and later back home, I kept the hoody on as a top around the house.

I like both garments but will definitely look out for the hoody again – this is a garment that really suits my life – it’s very attractive, it doesn’t show your bra, it obviates chafing when using a backpack and can be worn for all my daily activities. So far, it is my favourite of all the garments I’ve bought since I took up cycling, and the rich colour is a bonus.

Janus items are hard to source, so if you find a bricks-and-mortar reseller near you, check it out. I will certainly be looking for more of this brand in the future.

Update: I did indeed buy two more of the Sportswool hoodies, as these proved to be the more useful garment – incredibly handy after swimming when I leave the pool with wet hair, or when out walking, to protect your ears. After a time, I found the Designwool went baggy, so I would advise going down a size if you buy these garments – they’re also a little too thin for my taste.