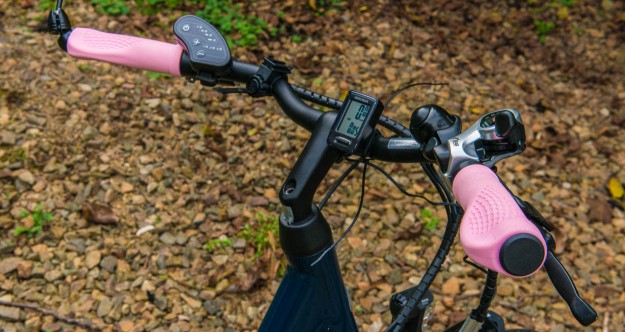 The bar grips that came with my Gitane e-bike were ridged rubber and I realised quite quickly that the ridges on them were quite uncomfortable for my hands.

It hadn’t occurred to me to change them, though, until I saw the DH’s Ergon Biokork ergonomic grips. These feel gorgeous and cost a fortune, but I am still on a pink kick, so I went on the hunt for a pink set. 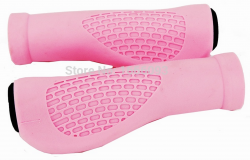 I found these VERY pink grips on French bargain site Aliexpress.com, sold by a vendor called Sport.Ing Boutique (at least, I think it’s a vendor rather than a section of the site).

They were only $20, so I thought they were worth a punt, as they seemed to be very similar in shape to the Ergons. Although coming from Taiwan, they arrived very quickly and I’ve been pleasantly surprised at the look and feel.

I had no idea how to change grips, but YouTube came to the rescue, and armed with rubbing alcohol and an allen key, the DH and I managed to prise off the old grips (by actually rolling them off like stockings) and put on the new ones in only a few minutes. 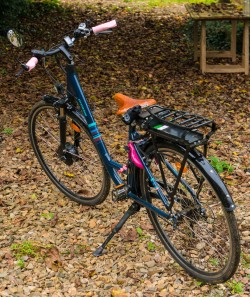 A couple of hours later, I went for a ride and I was astonished at how much more comfortable the handlebars were. The wide, ergonomic grip allows me to rest the heel of my hand on the bar, rather than having to grip with my fingers, and the soft rubber is very grippy and non-slip.

I don’t doubt they’re going to be filthy in about five minutes but right now, the bike looks fabulous with them and also my hands aren’t aching after a 12km ride.