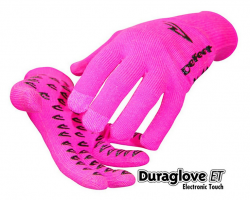 During the week, I experienced my first slightly cold ride.

We’ve been blessed with superb weather so far this autumn, with temperatures in the high teens, but my cold hands at the end of that hour were a reminder that things are about to change.

Since beginning cycling in August, I’ve been wearing a cheapo pair of Nakamura fingerless, padded gloves from Intersports, which have worked just fine, thank you. But for full-finger gloves, I went with Velouria’s recommendation on Lovely Bike and bought Defeet Duragloves.

Velouria wears the merino ones, which are black, but in the interests of glowing like a Belisha Beacon (a remark which probably shows my age…), and being highly visible when indicating, I chose the high-vis pink E-touch, which I got from Amazon.fr.

These arrived just a day or two later and my God, they certainly are pink.

In contrast to the merino, these are made in Coolmax and Cordura, with a bit of stretch, and silver in the fingertips for extra conductivity when using a touchpad. The palms and fingers are covered in sticky rubbery bits, which give you lots of grip. Although not designed specifically for cycling, they do brilliantly on the bike.

The fabric is pleasant and smooth to the touch, and the lack of padding hasn’t been noticeable now that I have my new ergonomic handlebars, which themselves are soft and rubbery. At the end of a 16km ride, my hands were also not at all sweaty, and I really liked the high visibility when indicating.

For only 20 euros a pair, these strike me as an absolute bargain, though I suspect I may need a silk liner in colder weather – I’ll report back on how they do in the depths of winter.