We live in a low-crime area. But even so, given how expensive bikes are, we’re never going to leave them without locking them. 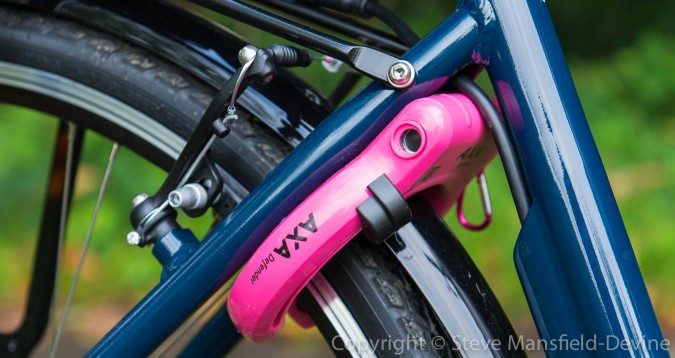 One of the things that attracted me to these Axa Defender frame locks was the colour – or, I should say, colours. It might seem like a trivial thing – after all, the purpose of a lock is security, not style. But the high-visibility colours we chose – pink for Trish (naturally) and green for me – have a couple of practical benefits.

First, I believe in being as visible as possible. The more colour you add to the bike the better. But I’ll concede that’s a minor point… 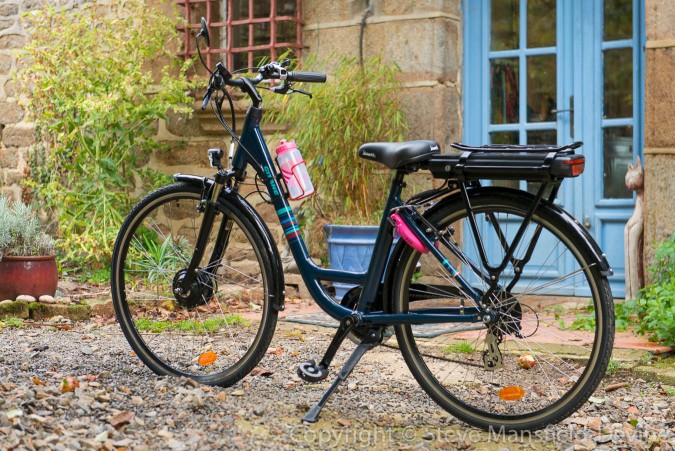 Trish’s bike with lock in place. See how it stands out…

The other is that the colour screams “I’m locked” to any potential thief, potentially deterring them before they’ve crossed that threshold of starting to steal your bike.

The great thing about this kind of permanently mounted lock is ease of use. The lock’s always there and you always have the key. That’s because, when the bike is unlocked, the key is captive – you ride with it in place. (But do be careful to lock your bike if left unattended even for a short time, otherwise some miscreant could lock your bike for you and steal the key!) An additional benefit of this is that it serves as a quick visual check of whether the bike is locked – if the key is in the lock, it’s unlocked; if it isn’t, it’s locked. We’ve added a small carabiner to each key making it simple to attach it to a keyring once the bike is locked. 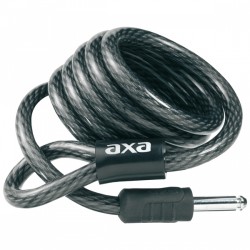 Locking the wheel to the frame is one thing, but for real security you need to chain the bike to something immovable. These Axa locks make that easy, too. A socket on one side of the lock accepts either a cable (in a choice of two lengths/thicknesses) or, for even greater safety, a fabric-covered, hardened steel chain (also available in two lengths/weights). So you can lock the wheel and secure the bike all with one key.

The Defender itself also uses hardened steel and has an anti-drilling plate to protect the lock mechanism. It meets the requirements of UK, Dutch, Danish, Finnish and Swedish insurers – probably others, too. It has Dutch ART 2 approval.

Two keys are provided, one a pocket-friendly type that folds into a case. If you make a note of the serial number, you can order replacements from Axa online.

Not all circular locks are the same – not even all the ones from Axa. We bought these locks while waiting for the bikes to arrive. And then we found that they were, in fact, already fitted with Axa locks. But the supplied versions seemed slightly flimsier – at least as far as the casing went. Also, when you unlock, the bolt springs back out of the way. Or it should, but on the supplied locks, this often didn’t happen properly and you had to manually check to ensure that the bolt had cleared the spokes (something you should do anyway, but it’s nice to find it always happens, as it does with the Defender models).

Mounting turned out to be easier than I expected. The locks are supplied with a clever mount system using metal straps in much the same way you might employ zip ties, but obviously much stronger. I’d already worked out a strategy for turning the bikes upside down (not easy with such heavy bikes and where the handlebars are festooned with things like the electric assist controller). It’s easier to fit the locks with the bike inverted because the best place for them is just under the seat stays where – because they’re within the rear triangle – they will continue to immobilise the bike even if they become detached from the frame. But, as our bikes were already fitted with Axa locks, the stays had bosses for bolts. Taking off the supplied lock and fitting the Defender was the work of two minutes, maybe less. There are fitting sets available if the lock somehow clashes with your brakes, but I imagine the supplied straps will allow it to be used with 99% of bikes.

Judging by the keys (and speaking as a hacker and occasional amateur lock-picker) the lock mechanisms themselves look reasonably secure and tricky to pick – we’re not talking about cheap wafer locks here, nor standard (Yale-type) tumblers. These are side-tumbler locks. I can’t say whether they’d be susceptible to bump keys, but they’re certainly beyond the skills of entry-level lock pickers like myself, and therefore will be impervious to nearly all non-professional bike thieves.

We bought our locks, and the optional cable, from Dutch Bike Bits.