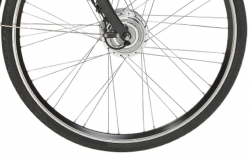 Oh well, it had to happen sometime – I just got my first flat.

Of course, I didn’t have any sort of repair kit with me, and even if I had, I wouldn’t have known what to do with it.

The idea of our rides is that we’ll do them together, so Steve has the repair kit and tools, but I was riding by myself today because he was under the weather.

I also originally had my repair kit, spare tube, etc, in a saddle bag, which Steve bought me before the bike arrived. Who knew that when it did, I would be so short even on a 45 frame that the saddle is banged down flush with the rack and I can’t fit a saddle bag of any sort?

I’ve been looking for a small, neat handlebar bag to carry my toolkit instead, but it will have to wait until next month.

I can guess what we’ll be doing tomorrow, then…

Of course, breaking down like this wasn’t any sort of issue. After realising what had happened, I pushed my bike up to the nearest farmhouse and asked if I could use the phone. As it happened, they turned out to be English. I phoned home (I was only some 5km away) and a few minutes later, Steve picked me up.

I have been deliberately riding around here in 5km loops so that I’m never further from the house than I can walk, should something go wrong with the bike, but I’m quite glad I didn’t have to push 22.75kg up a couple of steep hills to get home again.

A shame, though, as I was rather enjoying my sunlit evening ride after a day of mostly drizzle.