September was a mostly dry month, as was October, and temperatures have been frankly balmy, which has meant we now have some fabulous autumn colours.

Riding around the nearby lanes, I vary my journey each day to take in as many views, hills, valleys and bits of bocage as I can.

The basic tree for the bocage (a farming system of small fields bordered by banks and hedges) is the sweet chestnut, which turns a wonderful shade of dark saffron at this time of year.

Since our winds have been low too, there is much more leaf on the trees than usual, and every lane is bordered by 30ft-high chestnuts that feel almost aflame. 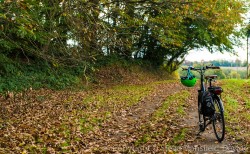 Add in the sweet and wild cherries, which have now turned scarlet, purple and pink; the yellow hazels; the burnt umber oaks and russet beeches; the stands of bleached siena maize and ploughed chocolate-brown fields and that would be enough even without the flaming walls of Virginia creeper on the grey granite farmhouses and the gardens full of screaming pink dahlias and Japanese anemones.

The verges are full of bracken, which is turning all shades of rust and yellow, while the butter-yellow field maples and the orange and pink fruits of the spindle trees and purple sloes add their own colours to the mix.

Not to mention the smells. Admittedly, not all country smells are agreeable! but at this time of year I sincerely regret Steve’s almost total lack of sense of smell. The maize, which was like walking through a huge vat of honey over the summer, now smells gently sugary, while the silage pits have a ripe molasses tinge. The apples and quinces are dropping now and the floral, sherbet scent of a ripe quince has to be experienced to be believed.

As the leaves rot down, they are giving off a sweet, rather mushroomy smell of humus, while the freshly turned soil has a sweetness of its own, only enhanced by the occasional bonfire or woodsmoke curling from a farmhouse chimney. And as you pass a garden, there is always something late in bloom and in this region, it’s often eleagnus, whose tiny, drab-white flowers give off the strongest, almost tropical floral scent that fills the air with invisible beauty.

Cycling, then, is a kaleidoscope of scents as well as colours at this time of year, and an experience that sharpens all the senses. Very welcome before the last of the leaves fall and the landscapes tucks itself up in bed for winter.