We bought bikes in order to exercise the dogs down the voies vertes. Our young sprollie, Cézanne, needs to go further than we want (or have time) to walk. But our old boy, Zola, is never going to be able to run alongside as we cycle, so we needed a trailer for him. And getting to the voies vertes meant a bike rack for the car. So began an orgy of spending that included panniers, computers, mirrors and many more accessories besides. Yesterday we finally did the ride we’d intended all along. And everything worked the way it was supposed to.

Thanks to the Thule EuroPower 916 bike carrier (with optional ramp) we can have the car loaded with bikes, panniers, clothing and dogs within about 15 minutes. That’s when we’ve left the bike carrier on the car – otherwise add 5 minutes to attach it (it’s that easy). Currently, we leave the DoggyHut trailer folded up in the back of our Citroen. Once we’ve arrived at the parking spot for the voie verte, it takes about 10 minutes to unfold and rig the trailer. Persuading Zola to get inside adds another 2.1 seconds. 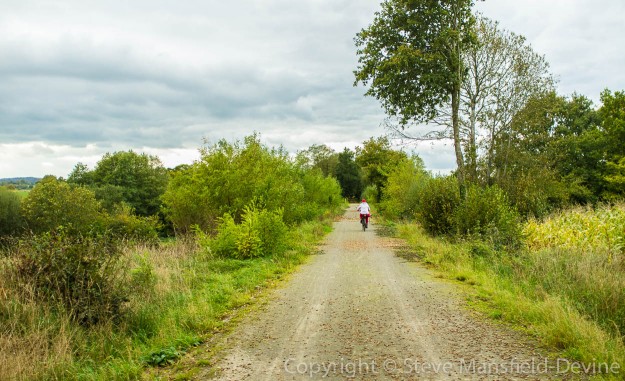 We set off under grey skies, with a chill wind. No matter – even on e-bikes, pedalling soon warms you up. I had a jacket clipped to the rack. The Carradice Carradura pannier (review imminent) contained the toolkit, spare inner tube, Fuji X100, hood for the jacket, pump … well, I won’t list everything – the point is it worked exactly the way I wanted it to. Thanks to the electric assist, towing the DoggyHut with 20kg of Zola inside was effortless. I adjusted my rearview mirror to keep an eye on him. He spent most of the journey sitting up watching the world go by, like a Duke in his Barouche Box.

We chose a familiar section of the Véloscénie bike route – one we’ve walked with the dogs many times. We used to join it much further down, going either east or west as the mood took us. Yesterday we repeated a ride we’d done earlier with Trish on her new e-bike and me on my rusty old Peugeot. Starting a little further east that we used to reach on foot, we took in both of the sections we walked – and then more.

The autumn colours are really coming in. And there’s heavy leaf cover on many sections of the track. 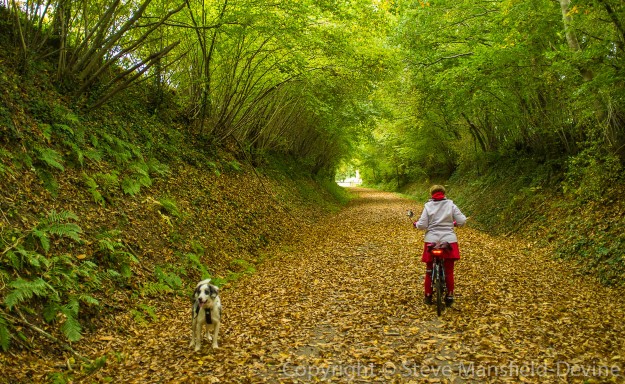 The biggest challenge, though, were the patches thickly carpeted with acorns. It must be a paradise for squirrels, but requires serious concentration when cycling. The wheels tend to skip about on the nuts, which also have a habit of camouflaging twigs. There were sections with chestnuts, too, which are worse. 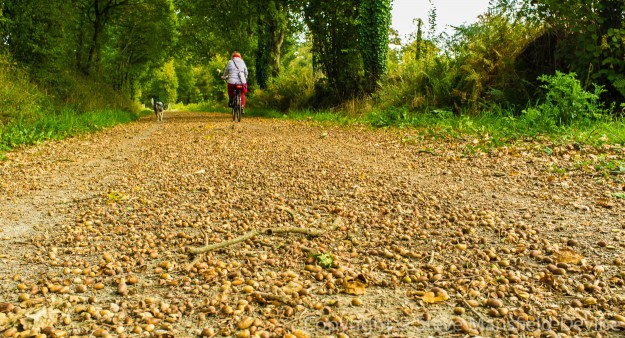 At length, we came to a section of the voie verte we’d not travelled before. In the mirror I saw Zola perk up and sniff the air. He’s half blind now but there’s nothing wrong with his sense of smell. I’m sure that dogs map the world according to scent and so he knew this was virgin territory. 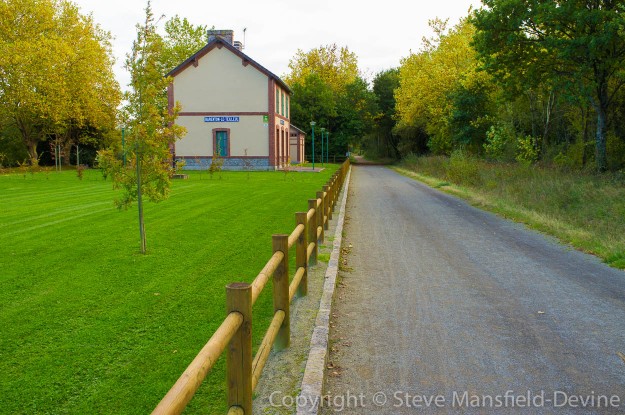 This section included one of the neatest station houses we’ve encountered on these routes. Indeed, as we passed, two men were mowing and strimming the grass. Cézanne took one look at the strimmer, thought about barking, then quietly moved on. This was the only point on the 7km stretch we travelled where we had to cross a road.

Not long after, we hit a stretch of the greenway we’d walked before, coming from the other direction.

One of the delights of the voies vertes is the way they tease and entice you with views and pathways leading off. We stopped at a point where an old farm track meets the voie verte. Trish had walked this the last time we were here, and now it was my turn. It felt ancient, worn deep between bocage banks and along the top of a steep slope running down between trees to a stream. Zola ambled along with me while Cézanne belted down the path after invisible rabbits. 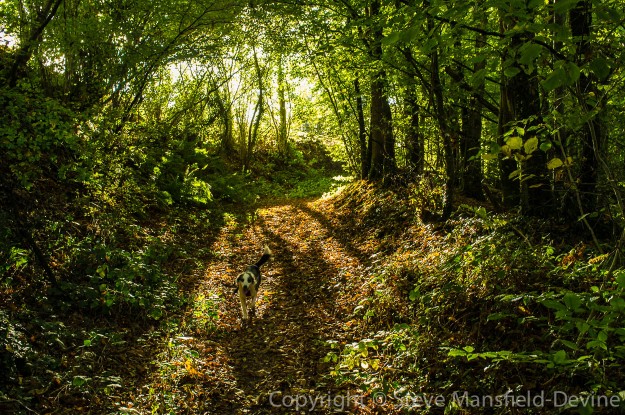 We’d done 7km so decided to turn back. The whole time we were cycling, the weather was improving, with the skies clearing and the temperature rising. The low sun brought out the strength of the autumn colours. 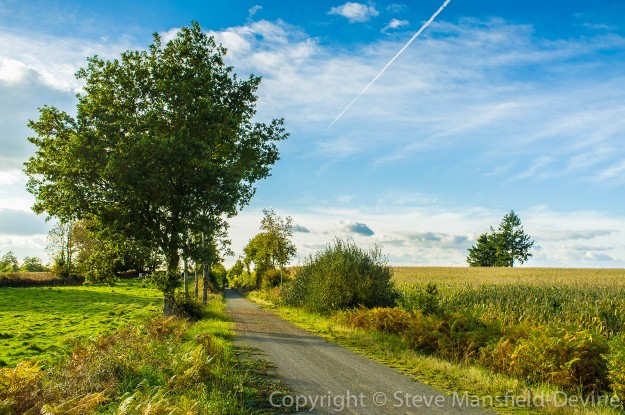 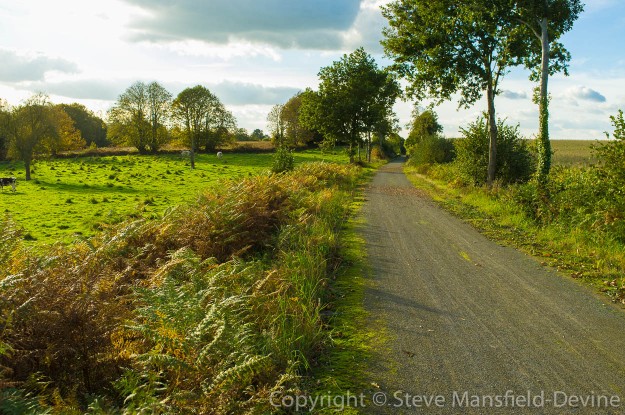 We paused at the disused station house that features in our fantasies about opening a tea shop. 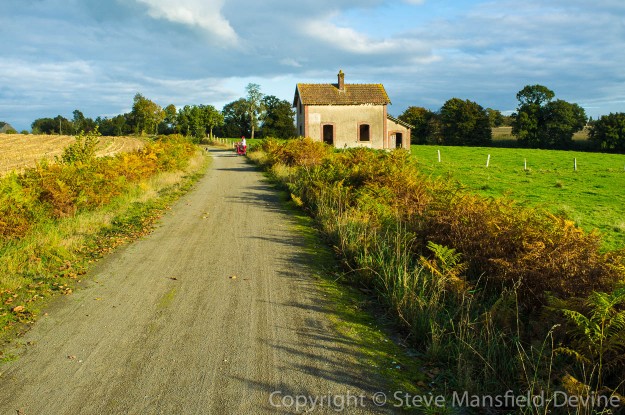 By this time, Cézanne had run about 13km – probably more, given that he’d raced up banks and zig-zagged across the path on the trail of scents. But while we rested a moment, he shot into a now-empty maize field. 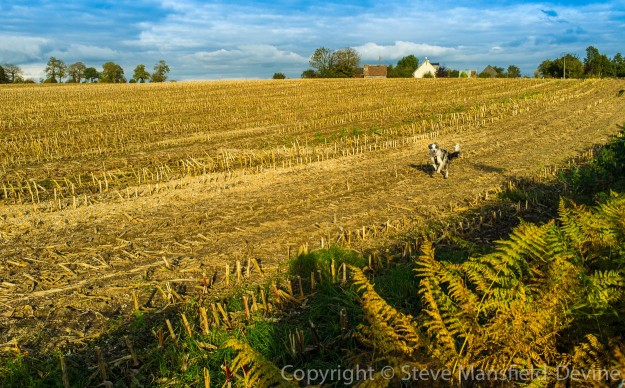 Corn cobs are his favourite toys and he spent a happy but frantic 10-15 mins trying to find one. 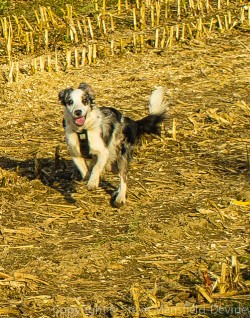 There’s simply no wearing out this boy. And in case you can’t see how happy he is in the above shot, here’s a crop.

Trish set off a little quicker than I was expecting. To catch up, I selected assist mode 3 and cranked up the speed. A glimpse in the mirror showed Zola standing up, pushing his head forward out of the DoggyHut’s open front panel, his ears blowing back in the slipstream. He looked a picture of happiness.

We got back to the car having ridden a smidgen over 14km. It’s not much, but I’m having to take things easy to start with.

And it couldn’t have been better. Everything performed in entirely the way we’d imagined – the bikes, the carrier, the trailer and all the accessories. And, for that matter, the dogs, with Zola content in his carriage while Cézanne, the canine mentalist, expending as much energy as he can. Such a perfect day…