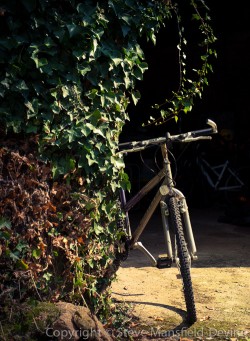 I love cycling, but I’ve found that you need to do it regularly, otherwise the inertia just becomes too great.

It’s not exactly as though I’m new to cycling. Since I grew out of my original set of wheels, aged six, I’ve owned bicycles from time to time.

When I was about 12, I got my first ‘racing’ bike, meaning that it had dropped handlebars and dérailleur gears – all five of them. I rode that for a few years, but can’t remember what happened to it. It was probably bought from Halfords.

While at college, in the late 1970s, my girlfriend and I shared a house with a keen cyclist. That gave me the bug again and I bought a Dawes 10-speed racer. Once I started work, I’d commute on that from Stoke Newington to Soho. So I had that bike for maybe 4-5 years before a taxi ran me into the kerb. In the three weeks it took for my back to recover enough to ride again, someone stole the bike.

Some time in the late 1980s I succumbed again. This time it was a Peugeot 15-speed mountain bike. To be honest, my riding history on that was spotty. I worked from home by then, so no need for commuting. And, at the time I bought it, my Significant Other had no interest in cycling. It spent a lot of time in the shed.

I did the only reasonable thing, and changed Significant Others. Once the More Significant Other and I had bought the house in France, Trish got herself a mountain bike too. But she didn’t quite take to it and I found mine was also languishing in the barn.

From time to time I’d pull the bike out, determined that I’d ride at least once a day to improve my health. But here’s the problem. When you don’t cycle regularly, there’s a serious obstacle to overcome.

You need a basic level of fitness for cycling to be in any way pleasurable. Until you reach that point, it’s all wobbly legs, burning muscles and sweat. And I’m not the kind of person who finds pleasure in ‘feeling the burn’. In fact, I’m firmly of the opinion that when it feels like your legs are tearing apart, you’re definitely doing something stupid.

And so there are days, maybe weeks of agony and tiredness to get through before cycling has any attraction – because, of course, the car is always there, beckoning. Same goes for the sofa.

While I love the sensation and freedom of cycling, as I got older that was simply too high a price to pay.

And this is where the e-bikes are so great. The physical cost of entry is much lower. You still get exercise, and I’m looking forward to the time when the electric assist will be switched off most of the time. But I know that I can build up to this gently – that I won’t be stopped in my tracks by a hill; that I can go on longer rides than I might otherwise have contemplated, confident that I’ll have help getting home.