Apparently, the Copenhagen Wheel is finally in production and you can pre-order it now. It’s a clever product, but I think its arrival has greater significance than just the availability of a cool new device. 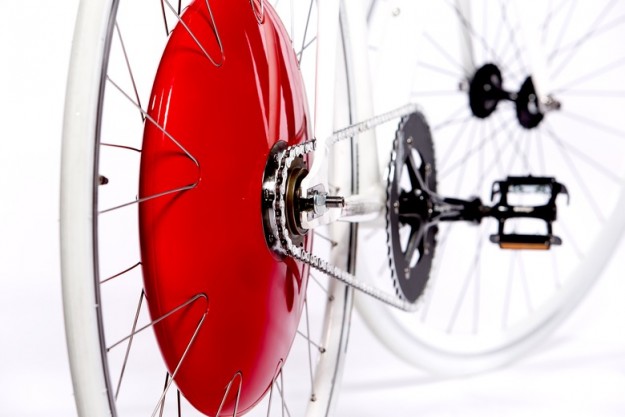 It seems that the age of the e-bike is truly upon us. We ordered our Gitane Organ e-bikes in Early August and mine still hasn’t arrived. And the reason for this, apparently, is that the factory simply hasn’t been able to keep up with demand. (Plus, it was, you know, August in France – but the demand thing is what we’re focusing on here…)

I’m sure there are cycling diehards who despise e-bikes because they don’t demand superhuman effort and a dedicated Lycra wardrobe. But actually, they probably hate e-bikes for the same reason that the bikes themselves are so great – that they open up cycling to everyone, including people who don’t care that much about cycling per se.

The Copenhagen Wheel – developed by engineers at MIT in cooperation with the city of Copenhagen – is another step in that process. If you already have a bike – or have your eye on a new one – that is either fixed gear or uses derailleur gears, you can turn it into an e-bike simply by swapping the rear wheel. That’s it.

There are already conversion kits for turning regular bikes into e-bikes, but they involve much more effort than simply swapping one wheel for another (although they do offer the possibility of using a bike with hub gears).

The promotional video for the Copenhagen Wheel is interesting in that it doesn’t focus on (in fact, largely ignores) what has been seen as the ‘traditional’ market for electric assist- old fogies like us. Instead, it rightly concentrates on the e-bike benefits that are valuable to everyone – the ability to go further, to not care about hills, to be able to haul stuff, and to arrive at your destination not drenched in sweat. Young, fit people will enjoy those benefits just as much as we decrepit specimens.

The Copenhagen Wheel also has attractions for geeks like me – it communicates, you control it and get data from it via an app, and it has an API to allow you to develop your own apps.

Anything that gets more people on to bikes is a good thing. Electric assist will bring people into cycling who previously thought it wasn’t for them – because they are too old or too unfit; because a bike isn’t capable of taking them far enough; because they want to enjoy trips in the open air, not expend a lot of effort; because there isn’t an app for it.

By putting more people on bikes, the e-bike is good for the environment, good for all cyclists (because it will encourage – even demand – the development of more cycling infrastructure and a cycling culture) and good for the riders. The Copenhagen Wheel is both a symptom of the rising importance of electric bikes, and another great step in their evolution.