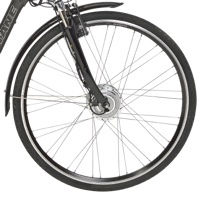 It has occurred to me that we made a rooky error. We ordered French bikes via a French store … in August.

For those of you not familiar with French ways, the country pretty much shuts down in August. It’s not as bad as it used to be, but you’ll still find many shops and factories either closed completely or doing as little as possible.

So we’ve waited three weeks so far for our Gitane Organ e-bikes. Now it turns out that holidays aren’t the only problem. According to the two shops we’ve spoken to, Gitane is unable to fulfil the orders because of a backlog. And this has been caused by unexpected demand, leading to a shortage of motors.

And although this is frustrating for us, I can’t help feeling it’s a good thing on the whole. It means that lots of people are buying e-bikes. And I’d be prepared to bet that a significant proportion of these customers are people who either wouldn’t have bought ordinary bikes, or who are transitioning from manual bikes to e-bikes where they might otherwise have given up cycling altogether.

E-bikes provide a way into cycling for a section of the population who otherwise would be put-off by the rigours of cycling. In my case it’s a simple health issue (so it’s an e-bike or no bike).

This means more bikes on the road, more people willing to define themselves as cyclists, more demand for facilities and consideration for cyclists, and a healthier population.

So yes, I’m annoyed at having to wait perhaps another 5-6 weeks for my bike. But I’m not altogether dismayed at the reason.