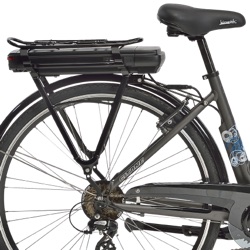 I’ve already explained why we’ve bought e-bikes. But it’s worth expanding a little on why the electrically assisted bicycle (vélo assistance éléctrique, VAE) is something for everyone to consider.

There seems to be a little misapprehension, and not a little snobbery, about e-bikes – especially in the cycling world. Although it’s rarely, if ever, phrased this way, the attitude boils down to, ‘it’s not real cycling’.

I think this attitude is an echo of the one that Grant Petersen skewers in Just Ride. The world of cycling has been heavily distorted by racing. And even if racing per se isn’t mentioned, it seems many can talk about cycling only in the context of sport or fitness – as though there is no other reason to get on a bike.

‘Cycling’ is riding a bike. Any bike. For any reason.

To be fair, I think things have improved in the three years since Petersen wrote his book. There seems to have been a rise in the popularity of recreational cycling, and this is reflected in the boom in sales of Dutch-style bikes and other sit-up-and-beg styles of bicycle.

There’s an interesting post on the Bicycle Dutch blog that reports on a rise in sales of e-bikes to young people in The Netherlands. It seems that e-bikes are no longer perceived as being only for the old and the lame. This post links in turn to one on Holland Cycling, which seems to lament this trend on two grounds, both of which are misconceived.

First is the fitness issue. Young people on e-bikes don’t have to pedal so hard on their commute to school, which can be up to 15km.

Second is the ecological impact. Charging the battery of an e-bike has a cost; of course it does – that electricity has to be generated somehow. But the impact is very small – far less, for example, than an electric car, of which environmentalists seem to be very fond.

There are several arguments against both contentions, but the most important point is that they are founded on the notion that, if not using e-bikes, these young people would be using regular bikes (or, as I like to call them, old-bikes). And this is not necessarily true – either for young people in The Netherlands or for potential e-bike buyers anywhere.

In the case of the Dutch kids, without e-bikes they may well choose instead to use bus services (no exercise at all) or scooters and mopeds (also no exercise, and polluting). In fact, there does seem to be some evidence that e-bike sales are replacing scooter and moped sales, mainly for reasons of cost and simplicity (no licence or insurance required).

By the way, cycling is exercise, but only of part of your body. If you’re concerned about fitness, you’ll need to do something else, too. And besides, you still get exercise on an e-bike – it doesn’t pedal for you – you just skip that really hard grunt work that makes cycling so tedious. The whole exercise argument is highly spurious.

What e-bikes do is get people on to bikes who otherwise would have stayed in their cars or used other motorised transport. And that means a much larger cycling population with all the spin-off benefits for cyclists of all kinds – such as a larger cycling lobby, greater awareness of cyclists’ needs, etc.

I think that having the option to select an e-bike as a form of recreation or transport is one way of avoiding that whole, ghastly Lycra-clad world of fitness nazis. You’re kind of saying, ‘actually, I’m not really into cycling’ when secretly you’re into the benefits (such as enjoying the scenery, or getting to work) without buying into the sport aspect. As someone who has had a life-long allergy to sport and suffers from lycraphobia (a morbid fear of looking like a dick in stretchy fabric), that suits me fine.