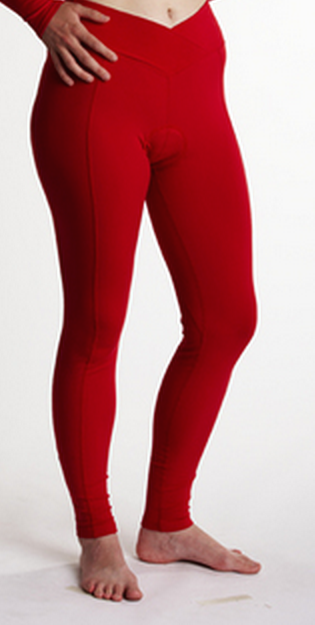 It was a case of mixed fortunes when I first hit upon Sheila Moon cycling apparel.

Finding her was the good bit – not so good was the fact that she had decided to close her company literally the week before, after 18 years in business.

The thing that attracted me to the Sheila Moon designs was the yoga-style crossover waistband on the bottoms. As a long-time practitioner of chi kung and yoga, I’m used to this sort of pant and know how comfy it is. Her designs were also feminine in a way I hadn’t found elsewhere in cycling clothing – not ‘sporty’ or racy, with flashes and logos and whatnot all over, but more like the clothes I wear in everyday life, with pretty prints and items that looked like they might do double-duty off the bike. Her tights and knickers also came in colours other than the ubiquitous and dreary black, and I liked her use of real-looking models rather than stick insects.

Given that she was closing down, I quickly ordered brushed supplex tights in black and an Artemis skort (the same tights but with an attached skort) in both black and red. (I’ve shown the red as you can see the seaming more clearly.)

When they arrived, I was absolutely thrilled with the quality. They are like the fleece-lined fashion tights I’ve bought in the past from Japan, but cut with cycling seaming and immensely stretchy. The waistband is beautifully soft and accommodating, and the chamois is a delight. They really do, as other reviewers have stated, feel like you’re not wearing anything at all.

The ankles open with a zip – not that I needed it – and there is reflective trim on either side of it, giving you a bit of rearward visibility. And the skort is good and long – just the thing for those of us who would rather cover up the chamois when we’re sitting in a bar or café. The only issue for me is that, since I am short, the legs are very long, and I might really have been better off with the knickers, which are probably ankle-length on me. 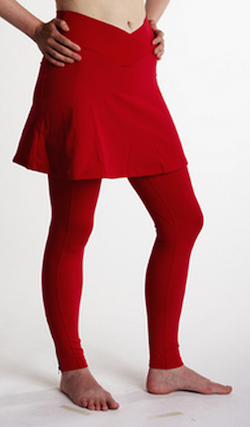 After quickly trying the items on, over underwear, I made another order, including knickers, and then – in a panic that I might lose weight with my new hobby – a third small order of summer wear. During all of this, I ended up in an email correspondence with Sheila herself, as she was busily folding the business and packing her own parcels.

I will review the items in turn once they arrive and once I’ve got some use out of them – winter fleece jackets, knickers, liner shorts, a shimmel, a cycling dress and a summerweight jersey. But for now, all I can say is keep a lookout for these items via resellers, because once they’re gone, sadly, they’re really gone.