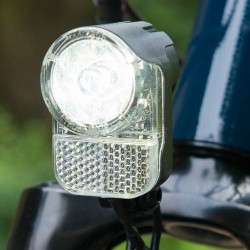 While our bikes came with lights already mounted, I felt they needed more. Call me old fashioned but at night I really like to see where I’m going. And extra lights are a bit boost to conspicuity both at night and during the day.

Each light has a rechargeable lithium-ion battery that you charge via a micro-USB socket. That gives us the option of running them from our e-bikes’ main batteries. And you could also use an external battery pack for greater range.

Both lights use the convention of pressing and holding the button for a couple of seconds to switch on and off – a way of preventing the device from being switched on accidentally if it gets bumped inside your handbag or manbag.

In both cases, too, the lens and case design leaks light to the sides, providing conspicuity abeam the bike.

The mount is identical in each case: a small knurled wheel lets you tighten a belt around the handlebars. The light then clips in & out very easily. The mount seems to stay put, although I’m not yet confident that it won’t rotate around the bar after you’ve prodded the light button enough times. 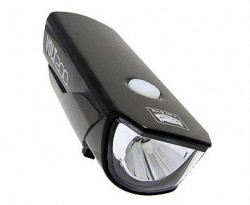 This model is very small and lightweight (at 58 grams, less than half the weight of the 700). It’s made of plastic and doesn’t exactly exude quality, but neither does it feel cheap, so in terms of build quality I’d classify this as a … meh!

There are two steady settings – full power (200 lumens) and low power (50 lumens) and you toggle between them with a single click of the button. Claimed battery life is 2 hours on full, 6 hours on dimmed. Once the light is on, a double click of the button puts it into flashing mode (there’s no strobe option) and another single click returns it to steady mode. In flashing mode, you should get 30 hours of use, says Cateye.

The light uses its power well: there’s a hot spot within which the light is evenly distributed. Adjusted to hit the ground at around 10m in front of the bike, this pretty much fills the width of a car lane, which is good. There’s also a weaker but still usefully bright penumbra that casts light quite widely, giving you enough illumination to see the sides of the road, improving situational awareness. That’s also good.

On full power, the light could still be quite dazzling for an oncoming motorist.

This model has three light levels, the highest being an insane 700 lumens, plus strobing and flashing modes. Repeated pressing of the button cycles you through the modes. This can be annoying.

On full power, the light output is staggering. I swear I’ve owned cars with dimmer headlights. (Ah, those happy days, leaning forward in the Karmann Ghia, peering through the windscreen in the hope of catching a glimpse of the road surface.) Cateye claims 2 hours of battery life in this ‘dynamic’ mode, 3.5 hours at the 300-lumen ‘normal’ setting and 10 hours at the 100-lumen ‘all night’ setting (by which time the sun is probably coming up). The ‘hyper constant’ strobe setting – which has a motorist-aggravating 800-lumen peak – should run for 7 hours, the firm claims, and the 100-lumen flash mode for 50 hours.

It sounds simple. In theory, it’s great. But the button is quite stiff. It’s easy to make a single click rather than a double, which cycles you down one setting, forcing you to click five more times to get back to where you were. Perhaps one will get used to the feel in time, but I can see this being even more of an issue with gloves on.

The light spread is very even. Basically, on full power, the whole world ahead of you is lit up.

The battery is removable – the whole rear section of the light unscrews – so you could, conceivably, carry a spare. Cateye sells a recharging cradle for just such a purpose. The battery pack is interchangeable with the Volt 50 and 300 models.

When you turn it off, the light remembers the setting you used last and returns to that the next time you switch it on.

Unlike the 200, the 700’s button is not illuminated (except as a warning when you’re down to 20% of battery power), which makes finding it for a quick light change more challenging.

The build quality is irreproachable – very solid and sturdy. It inspires confidence in its ability to last.

So, which is better?

If you had to pick one, you’d assume you’d go for the more expensive, more powerful and more fully featured 700, right? Well, I’m not so sure.

It’s easy to presume that the more light the better. But there comes a point where adding more lumens can introduce problems.

First, there’s the issue of dazzling oncoming motorists. That’s a controversial subject, but it has prompted Germany to impose regulations about bike lights. With both of these lights, you can dim them if you see a car coming, much as you would dip your headlights on a car. Doing this is much easier on the 200, because it has an illuminated button and only two steady settings. With the 700, you have to grope for the button and risk going too far in terms of clicks. It’s easy to find yourself on the strobe setting (which I find extraordinarily annoying at night) and having to cycle around again.

Also, once you have enough light to see where you’re going, adding more just introduces dazzle for you, reducing your night vision (ie, ability to see stuff outside the directly lit areas). Speaking as a photographer, I’d say your eyes stop down and shadow detail is lost. So why have more than enough light? And I feel the 200 is enough.

While the 700 has an even spread of light, that includes the top of the beam. Put another way, mounting this parallel with the road surface and leaving it on full power is an invitation for temporarily blinded motorists to drive into you. You’ll need to angle it downwards, at which point it could be you who’s dazzled by the road surface.

On the other hand (and there’s always another hand, isn’t there?), when you’re alone on a strange country road, or crossing an unfamiliar desert at night, the brightness of the 700 does inspire confidence. I would just say, use with caution.

I bought the 700 for my bike, but I have a suspicion I’ll be eyeing the 200 on Trish’s bike with some envy. Which is odd.

So much for choosing between them – should you buy either one? Yes. These are quality products and won’t disappoint.