I love riding down the voies vertes with the dogs. In fact, any outing is made more pleasurable by their company as you watch them discover things you hadn’t seen. But it does make for some complicated cycling. 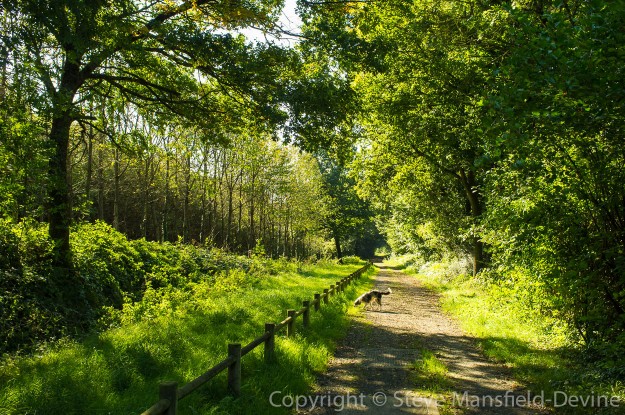 We made a short, 6km (each way) jaunt down a section of the Véloscénie today. We’d previously walked a small section of it, but much of it was new to us. Being Sunday, and glorious weather, it was busy. We met many walkers, even more cyclists – including one couple of around our age on e-bikes – and even an extended family group using the greenway as a boules court.

Whenever we meet people, I put Cézanne, our 20 month-old sprollie, on a lead, which means dismounting and walking, or waiting for the others to pass. It’s only polite; while Cézanne is the world’s friendliest and most harmless dog, people can get worried, especially in an area where hunting dogs are common. (Hunters were out in force today – the whole day has been punctuated by the sound of gunfire.) 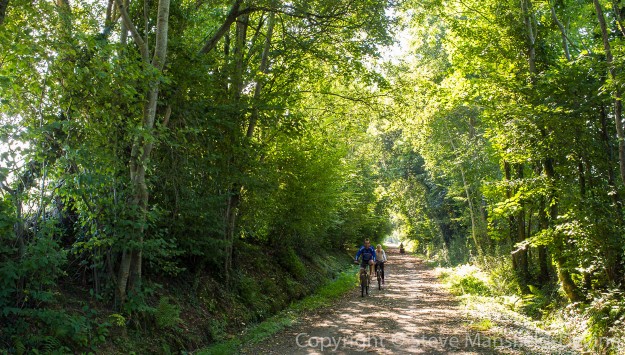 I also have to do the dismounting thing every time the voie verte crosses a road, which was more frequently than we would have liked on this section. Trish, who was towing Zola, our old Breton spaniel/gordon setter, in the DoggyHut, also dismounted at the crossings.

All this makes for very slow progress, but it gives you time to admire the countryside. The views on this section, from Bion to Le Haute Manoir, varied enormously. At one point there were beautiful poplar plantations glimpsed through the trackside trees. 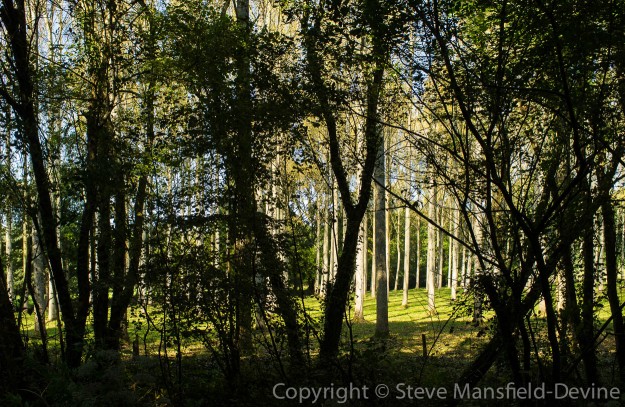 At other points, the countryside opens out into classic Normandy farmland. 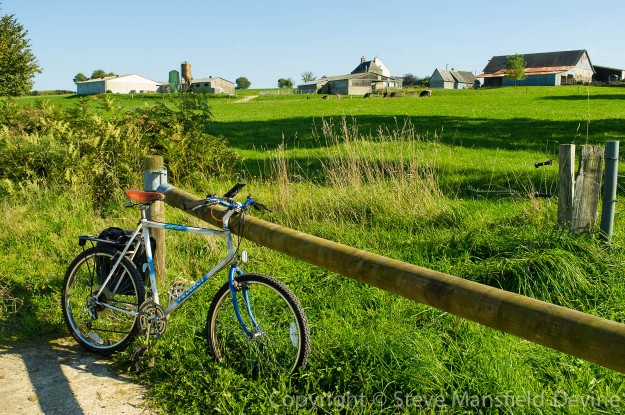 You may notice in the picture above that, while I await the arrival of my new bike, I’ve mounted the new Brooks B67 saddle on the old Peugeot rustbucket. This meant loosening and re-tightening the bolt for the seat post, during which I somehow managed to affect the brake cable tension. The Peugeot never had much in the way of braking power. On this outing, it had virtually none, which called for some forward planning in terms of energy management.

The Brooks saddle was surprisingly comfortable given this was its first use. By the end of the ride I was getting a little soreness in the sit bones, but nothing more than I’d had with the old plastic saddle.

One of the things I like about the voies vertes is spotting bits of old railway infrastructure. There are many small station houses, one every kilometre or so, it seems, with most of them now private dwellings. (Some, temptingly, are empty and ripe for renovation.)

On today’s trip we found a couple of former goods buildings joined by a platform on what must have once been a siding. The field in which they sat was fenced using short sections of rail hammered into the ground. 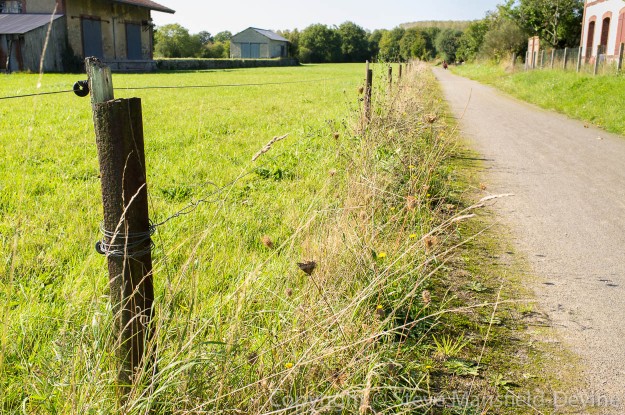 Fenceposts made from bits of rail

For me, though, the best sections are always the ones in woodland. The sense of wellbeing – even when you’re knackered – is worth a hundred times the effort you put in.