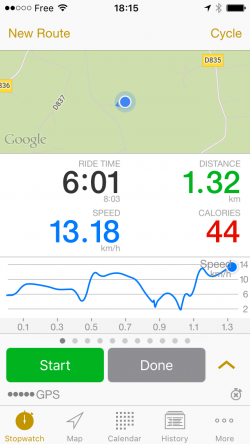 Okay, it’s true, I’m a geek. Whenever I take up any new hobby – whether it’s flying or cycling or watching movies (yes, dammit, that counts as a hobby), my first thought is, what software do I need for this?

It was inevitable both that I would get a cycling app for my iPhone and that there would be such an app. There’s an app for everything.

A contributory factor is that our new e-bikes come with a USB port, to provide power for accessories.

My needs are simple – I basically want a bike computer. I want to know current speed, average speed for this sortie and distance covered. Other features, like altitude, and even maps, count as ‘nice to have’. I really don’t care about how many calories I’ve burned – I know I’ll just use that as an excuse to have another Snickers.

I tried Strava first. It didn’t last long. It’s the most popular app in the genre, apparently. But there is just too much nonsense about ‘goals’ and measuring performance and achievements. Oh, and sharing, which is a big thing with Strava. I mean, seriously, who cares how much I cycled today? I can just imagine what my friends would say if I started sending them emails or Facebook updates with such narcissistic trivia. And the concept of a leaderboard, where your time on a route is compared to other people’s, even total strangers, I find frightening. What kind of self-obsessed monsters actually care about beating people they don’t even know? Other than CEOs, obviously…

So, as soon as Strava hit the trash, I turned to Cyclemeter. This looked more like what I was after. Yes, there’s all that goals and sharing bollocks in there too, and it uses that dread word ‘workouts’ far more often than I would like. But that stuff is much easier to ignore. In fact, pretty much everything I want from an app is on one screen of Cyclemeter. It shows speed, ride time, distance covered and a small map. There’s also a ride profile that graphs your speed over time, should you find any use for that information. You can also switch to another page just showing the map.

I was so certain that this was the app I needed, I signed up for the ‘Elite’ version (about $5 a year, if memory serves). One of the benefits of this service is that you can choose to have the map always oriented in the direction of travel, rather than north upwards.

I set up my iPhone using a Topeak mount (review coming) on my old Peugeot (yeah, still waiting for my e-bike) and we set off on a part of the Vélo Francette route. Like many voies vertes, this one is an old railway line. It hugs the Varenne river flowing in the bottom of a beautiful valley.

Let’s focus for a moment on that word ‘valley’.

I suspect the developers of Cyclemeter live in an area with excellent cellphone coverage. We don’t. It’s patchy at best. In the bottom of a beautifully wooded valley, there’s none. Not even a hint of a bar. Which meant no map. Oh well, such much for that nice-to-have. I can find no mention on Cyclemeter’s website of offline maps, so I’m assuming they’re not available. The app uses either the Google or Apple maps API (your choice of which).

The next challenge I found is that the phone kept going to sleep, in its normal, huffy ‘you’re not paying me any attention’ way. Swiping the screen and then entering the PIN while pedalling is perfectly possible, but potentially lethal for a just-back-into-cycling, nearly 60 year-old. Fortunately, Cyclemeter’s settings give you the option of keeping the screen alive, either while the app is running, or just when it’s recording your ride. That, however, could contribute to the next issue.

Not long into the ride, the phone died. The battery was flat. Okay, it’s an old (in technology terms) iPhone 5 – because I refuse to upgrade my phone every time Apple burps out a new one. The battery is not in the peak of condition and using any GPS app continuously like this is going to hit the battery life hard.

I have a rechargeable battery pack that straps to the handlebars. I’d even brought it with me – but with the wrong cable (doh!). There’s also the option to run the phone off the e-bike’s battery … you know, when I get my e-bike.

So I think I can get this to work, even if I only have maps from time to time. But I’m still not entirely sold on the idea.

Frankly, a £12 bike computer would give me everything I would get from Cyclemeter, except the maps. (I should stress the ‘I would’ in that sentence. The app is loaded with features that I’m sure others will find indispensable. They’re just of no interest to me, which is why I’m not calling this a review per se.) And like I said, the map feature is a nice-to-have rather than anything essential. I possess, even if I say it myself, an excellent sense of direction and outstanding map-reading skills. The latter started in childhood. My father was an amateur rally driver and former artillery spotter. He knew his way around maps and loved to teach me. By the time I was six or seven, while my friends were wasting time reading Famous Five stories, I was poring over one-inch Ordnance Survey maps, turning the contours and symbology into images of landscapes in my head (we didn’t get out much). These skills were honed later when I became a private pilot, although in aviation we call them ‘charts’ because that sounds more expensive.

Given that I’d be using so few of Cyclemeter’s many features, is the extra complication worth it? I need to remember to have the right cable. I need either to remember to charge and bring the external battery pack or sacrifice some of my bike’s range.

There’s also the issue of having an expensive smartphone perched on top of the bars, in prime position to hit the ground should I go over.

Actually, none of these is a deal-breaker, and I may just persist with the app. But I think it’s worth asking yourself, when you commit to buying an app, or even a fancy bike computer, do I really need all this stuff? Instead of all that quantified self crap, just enjoy the ride…