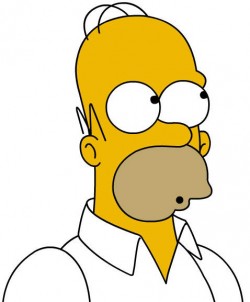 As Homer Simpson once memorably said: “Facts are meaningless! You could use facts to prove anything…”

And statistics, which are not necessarily the same thing. So one wanders into the whole helmet/no-helmet debate with some trepidation. And yet here I am…

The problem with this discussion – as with so many on the interwebs – is that, sooner or later, someone wades in with a didactic statement along the lines of: “you should(n’t) do X because… <insert favourite study/theory/prejudice>”. The supposedly debate-ending assertion is presented with no context or acknowledgement of counterbalancing factors.

Nonetheless, the helmet debate remains one worth having. So the purpose of this post is not to state a position or to convince anyone – because the fact is I haven’t come to any really firm conclusions. But I thought I might as well present some of the arguments and my thoughts about them. If you think I’ve missed an important issue, by all means let me know in the comments.

They make you cocky. There has been research in a number of domains that suggests the safer people feel, the greater the risks they take. This has been notably true with cars. As drivers have become safer, thanks to airbags, crumple zones and side impact bars, deaths of pedestrians have risen. I once saw an interview with a safety expert who said that if we want to reduce vehicle accidents, cars should be fitted with a large, sharp spike mounted in the middle of the steering wheel aimed at the driver’s chest. Then watch how carefully people drive.

I’m sure there’s a similar effect with safety gear on cyclists. But we have to retain a sense of proportion here. For a start, bikes don’t weight two tonnes and travel at 70mph. The accidents you have on bikes are less dramatic. And so a small shift up the accident spectrum caused by increased over-confidence is going to be very minor.

And there are other, very important factors at work here. For instance, are you a risk-taker to start with? If you are, then the extra risk-taking cause by wearing a helmet might just start nudging you into more deadly situations. If you’re the cautious type, though, there’s probably still quite a large margin of extra risk you can take on board before things get hairy.

And what’s the context? If you habitually ride your mountain bike along the edges of deadly precipices, or like to traffic-jam during rush hour in Tokyo, then again the extra risk-taking could be problematic. If you spend all your time pootling down greenways in sparsely populated parts of Normandy, not so much.

As a risk-averse pootler, I don’t think this argument applies to me.

Drivers leave less room. This is based on research in 2006 by Dr Ian Walker. And it’s interesting stuff. In a nutshell, if a driver thinks you are a competent cyclist (as indicated by the wearing of a helmet), he or she will give you less space when passing. Conversely, women, helmet-less riders and wobbly cyclists are given more space.

I think it’s good, valuable research. But I would caution against drawing too many conclusions from it. For one thing, while the amount of space given varied, as far as I’m aware it was always safe – ie, the cyclist was never actually hit. So we’re talking about different degrees of nothing bad happening.

Also, in order for the drivers to have made these varying allowances, they must have been aware of the cyclist, at least at a subconscious level. As we all know, the classic vehicle/bike accident is a Smidsy (Sorry Mate I Didn’t See You). This, I think, limits the relevance of the research to actual accidents.

And while, statistically, vehicles might pass further away if you’e not wearing a helmet, there will always be outliers. It’s the ones that don’t follow the statistical mean that you have to worry about, and that applies regardless of whether you’re helmet-bearing. So, best be wearing a helmet for when that non-conformist driver comes up behind you, because at that point all statistical bets are off.

You’d be dead anyway. This argument, which I’ve seen pop up many times on forums, is that if a truck hits you at 60mph, then (to paraphrase someone, possibly Seinfeld) the helmet is wearing you for protection. And that’s true. But this is a reductio ad absurdum. There are plenty of other forms of accident in which the outcome isn’t such a foregone conclusion. At some point on the accident spectrum, on the border between lethal and non-lethal, there’s region where a life can be saved by introducing another element – such as wearing a helmet.

Helmets are no good anyway. I’ve seen conflicting reports about this, based, I suspect, on tests using different standards or methods. I’m inspired to note, however, that the polystyrene inside helmets – while pretty flimsy looking – is not dissimilar to the kind of packing you get with a new PC. So, does your brain really deserve less protection than your laptop? 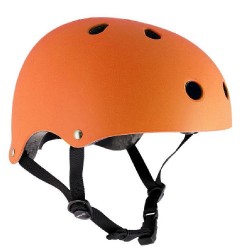 In 95% of cycling deaths, the cyclist wasn’t wearing a helmet. This is one statistic, pulled pretty much at random. It comes from the Snell Memorial Fund (PDF) which promotes helmet wearing. Here are some more fun facts from the leaflet I just linked to: two-thirds of the 700 cyclist deaths and one-eighth of the 43,000 injuries in the US in 2007 involved brain injury. And 85% of the bicycle accident-related head and brain injuries could have been prevented with a helmet,  claims the SMF.

To be honest, if those figures are right (and I’m sure the SMF genuinely has reason to believe they are) that’s a pretty compelling case.

I do worry about numbers, though. You’ll find lots more online – there’s a page of them on helmets.org. The trouble, once again, is understanding context. That 85% figure, for example – where does that come from? How was the assertion that a helmet would have made a difference arrived at? It seems to me that this would be a difficult call even for a specialist surgeon to make in an individual case, let alone for a statistically significant sample.

All too often we see figures about the numbers of cyclists killed or injured with no real way of knowing what kind of difference a helmet would have made. For example, with the statistic that opened this section, what proportion of that 95% of cycling deaths would have been prevented by helmets? Is there really any way of knowing?

And, once again, I would like some more context. Were these experienced cyclists or occasional ones? At night or during the day? In traffic or alone on an empty road? What did the head hit – car, truck, kerb … what? What other factors were involved – drink, drugs, tiredness, age, fitness, speed of travel, type of bike, condition of bike, weather, sex of rider, attitude, state of mind…?

Same goes for the much-touted example of Amsterdam, as in: “They don’t wear helmets there, and they’re doing alright.” Well, hmm, yes. But what’s the average ride distance? What roles do a national bike culture and cycling infrastructure play? And so on and so forth…

I really have my doubts about statistics – all of them.

What’s the harm? Well, we’ve dealt with some of this above (cockiness, etc). But as I wasn’t convinced by any of those arguments, this one gains strength. This is the ‘you might as well’ argument, also known as ‘better safe than sorry’. Of course, you might hate wearing hats, and that’s going to be a great reason for not donning a helmet right up to the point where your head hits the kerb.

There are lots of other arguments around helmets – cultural ones, you might say. For example, there are people who insist that dispensing with helmets will encourage more people to take to bikes – in fact, they’re doing so already with schemes like Boris bikes. These are interesting topics for debate, except that none of them really interests me. I’m mostly concerned with the health of my brain because I’m convinced that one day I’ll need it.

So what’s the conclusion?

Am I going to wear a helmet? It depends.

In my experience (what I remember of it), bike accidents mostly fall into three groups:

Number 1 doesn’t worry me much. I find that you can generally save yourself. You might still end up on the ground after a staggering, arm- and leg-waggling pratfall, with a few abrasions, but nothing life-threatening.

By and large, the same goes for number 2 – although it’s probably curtains for the hedgehog. Unless you’re in town. There are just too many things to smack your head against during the pratfall – the ubiquitous kerb stone, traffic signs, walls, parked vehicles, all manner of hard, unyielding objects.

So, while ambling along the greenways, where there are no kerbs or motor vehicles, I’ll probably not bother with the helmet. But when on the road, I will.

I’ve already bought the helmet, so I’ll post a review when I’ve had the chance to use it in anger.