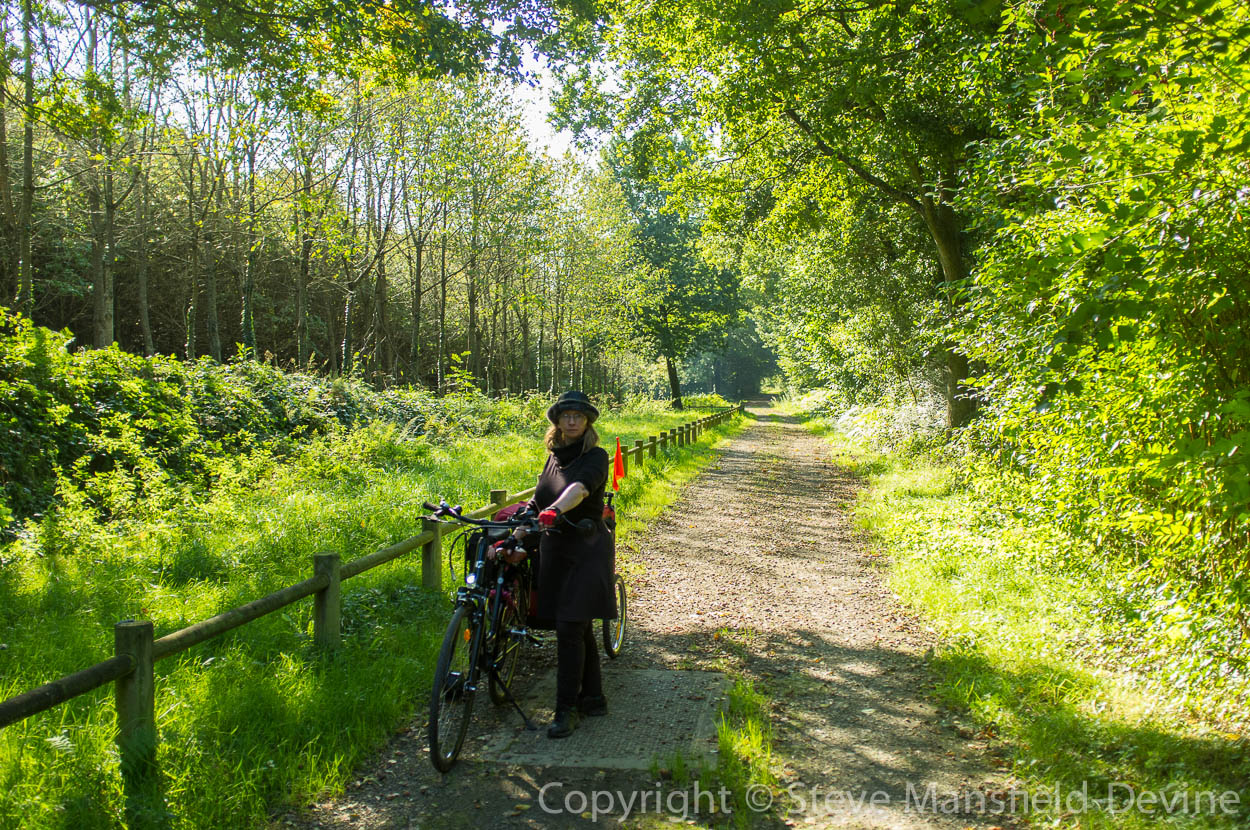 Trish on the voie verte near Mortain

I’ve now been cycling pretty much daily for a month.

At first this was on the stationary bike, but since I got the Gitane, a week ago, I’ve been out on it every day.

My first journeys were my old routes for walking the dog, which I discover on Mappy are 5.0 and 5.2km in length. The roads round here are pretty quiet, which is just as well for me, as getting used to traffic is something I intend to do very incrementally.

But a couple of days ago, I headed out into new territory and the sense of freedom was immense. For years, I have passed a lane that I’ve never gone down. Simply driving around like that, for the sake of it, isn’t something you do in a car, and if you’re walking, you know you’ve always got to walk back, but the bike with the electric assist is a different kettle of fish.

What I found was a lovely country road with a fantastic view. Sitting up high on top of the hill, on my tall Dutch bike, the fields and distant farms spread out all around me, I felt like the Queen of the World.

That ride turned out to be a nice 11.2km and I was very comfortable. The excruciating tailbone pain that had haunted me since the trip on the vélo francette had passed and I felt at ease on the bike with my new Brooks 67S saddle, which is an order of magnitude more comfortable than the Kinetik my bike was supplied with.

Yesterday, I headed out for a 12km ride on a winding country lane I had earmarked as my possible regular route. Aside from one motorist getting rather too close and sitting on my tail (I pulled over to let her pass), it was a fantastic ride, past beautiful tumbledown farms and old railway cottages, through towering maize crops and along freshly cut grass verges. In my red Sheila Moon kit, I daresay I look a bit like Mrs Santa, and my outfit certainly got lots of smiles (I have kind of ceased caring, frankly).

Today, it was the turn of the voie verte again, between Bion and Romagny. We had the dogs with us, which holds things up somewhat, and Steve of course is still on his crappy old Peugeot roadbike, which entails greater effort. But it was still a lovely ride, past many lovely old stations now converted into houses.

We did about 12.2km, with frequent stops for barriers, to cross roads, to pass other riders and walkers and once even for a game of petanque being played in the lane. A sunny September Sunday on a voie verte not too distant from a town had clearly brought everyone out to play, but equally everyone was in a good mood, and apart from Cézanne disgracing himself by chasing a chicken, everything went swimmingly.

I can’t wait, though, for Steve to also get his bike. This lengthy wait is driving us both nuts, and today we turned back because of the endless slow descent, which for him meant the prospect of an endless uphill ride on the way back – nothing at all on the Gitane, but a nasty endeavour on an old roadbike with no brakes.