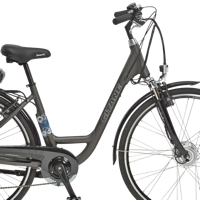 As soon as we discovered electric bicycles (e-bikes) we knew they would be an important part of our future. We wanted to get (back) into cycling, and the e-bike will make that possible.

I’m a man of a certain age. The age of my wife, Trish, is a secret known only to her and our insurance company. But neither of us is in the first flush of youth.

Trish does daily tai chi and occasional yoga. I mainly raise my pulse rate by getting angry at people on the Internet. And we walk the dogs most days. But neither of us is what you’d call an athlete.

I also have a few health issues. I won’t go into those because talking about them always reminds me of my grandmother and her single topic of conversation – her ailments.

I used to cycle. Back in my twenties I commuted from Stoke Newington to Soho in London every working day for a couple of years on my beloved Peugeot racing bike. I didn’t wear a helmet and loved traffic-jamming on the Euston Road. It’s a wonder I’m still here.

Actually, I was knocked off my bike by a taxi and, while I was recovering from the resulting bad back, had my Peugeot stolen from our company’s offices.

Shortly before moving to France, Trish & I bought mountain bikes. I used mine a bit, Trish not so much. Part of the problem – for someone not already fit enough to ride hard – is that the going gets tough before the journey’s even started. At the bottom of our driveway you can turn left or right. And whichever way you point, there’s a bloody great hill in front of you. It’s discouraging.

We finally gave the bikes to a friend. But lately, Trish started thinking that having a bike might be a good way to exercise our sprollie, Cézanne. This was inspired by our discovery of the voies vertes, the network of greenways, mostly on former railway lines, that criss-cross France. They’re flat and safe and mostly empty. We frequently use them for walking the dogs (we also have an old spaniel. Zola), and in a hour of walking rarely encounter more than a handful of people – mainly cyclists. Sometimes we have the place to ourselves, even in summer.

So Trish bought a cheap secondhand bike, to see if this might be a feasible option. It clearly was, but the bike itself was rubbish. Trish discovered Dutch bikes and fell in love with the absence of a crossbar. Then we met a Belgian couple who were touring on their Dutch e-bikes. Instantly we knew this was the solution. Except for the price…

We’re downshifters. That’s another way of saying we’re broke by choice. The €2,500 price tag of the Belgians’ bikes put them way out of our league.

And then a friend of a friend pitched up at our house on her Gitane Organ e-bike. 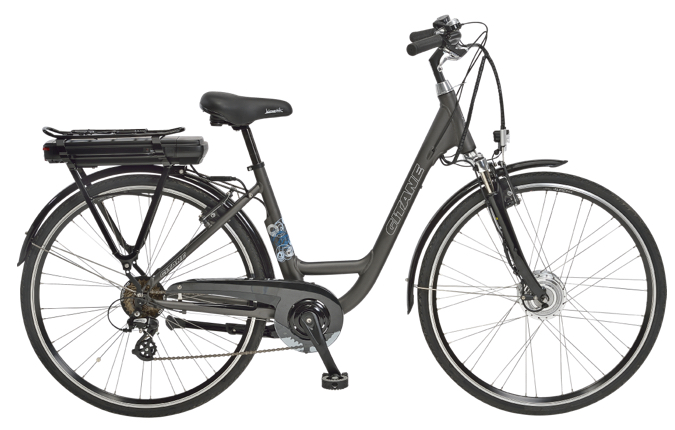 Gitane is a brand well-respected in France and the Organ is the country’s biggest-selling conventional bike. The e-bike version is, as these things go, inexpensive, starting at €1,000 for the version with the 8Ah battery and rising to €1,300 for the 14.5Ah model.

You can find a number of e-bikes at this price point. But many are the only e-bikes in a manufacturer’s or retailer’s range. I reckoned that it’s better to buy the entry-level model of an (otherwise) expensive brand rather than the top-priced model of a budget range. That way, you get the benefits of the engineering, after-sales support and technology development of a more serious brand. Given that this bike is based on one of France’s best-selling products there are also economies of scale, which suggest you might get better than expected quality/features for your money.

(This, by the way, is a hangover from being a private pilot. I’d often read how the light aircraft produced by Aérospatiale benefited from the same technology and advanced manufacturing facilities that went into things like the Airbus and military fast jets. The result was quality and features that you wouldn’t necessarily expect at that price.)

We both tried the FoaF’s bike and it was a revelation. The Organ (and yes, it’s a silly name) has three levels of electric assist – or none at all. I cycled to the end of our drive with the assist turned off, turned to start up one of the dreaded hills and selected the lowest level of assist.

It was as if a giant hand had descended from the heavens and was pushing me gently up the hill. Yes, I was still pedalling, still making effort, but the hill had disappeared. It was as though the Earth was flat.

And so we’ve ordered our bikes. Two weeks have gone and we’re getting impatient. (We made the mistake of ordering a French bike from a French retailer in August. Doh!) We’ll be saying a lot more about why we chose e-bikes in posts to come … once the bloody things have turned up. Stay tuned…