Trish discussed hi-vis clothing a little while ago. Frankly, I think this is a no-brainer: it’s better to be seen than to be stylish (an argument I have used for my clothing choices for years). But it’s not just about wearing something bright.

Above you see me dressed in highlighter yellow with a screamingly green helmet. And yet, while it’s not exactly a case of ‘Where’s Waldo?’, I do rather tone in with the landscape. But here’s Trish on the same day. 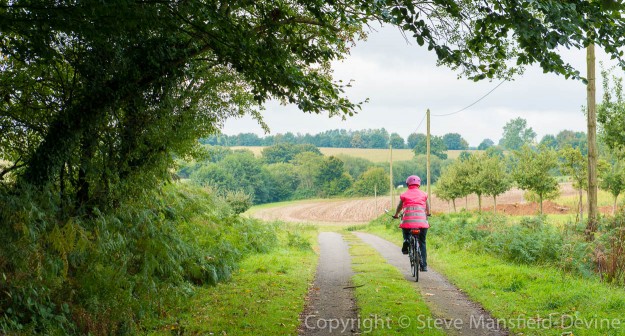 Her pink outfit definitely stands out better. It’s a colour you don’t expect to see in the landscape.

Now, it has to be said that the spectral sensitivity of the camera is not the same as the eye, and I was a little more noticeable than the photo would suggest. But so, as it happens, was Trish.

Some people have strong feelings about hi-vis gear. There’s an argument that cycling needs to be normalised in society and one way of encouraging people to embrace it is by saying that you don’t need special clothing to do it. I get that – at least, in places like London. But we’re in France, where cycling is already normal, and where people want to wear special clothes.

I have seen comments on forums from people who say they don’t want to wear hi-vis because they prefer to look cool or stylish. At the risk of sounding like a grumpy old git (which is what I am) this is plain stupid, although it may be a self-correcting tendency. I mean, if you weigh ‘hi-vis & alive’ and ‘cool & dead’ in the balance, and you choose the latter, then maybe you’re not the most valuable member of the gene pool.

It’s all about how much risk you want to take. If you’re happy to accept a higher risk of being run down in exchange for being part of a movement to encourage cycling … well, to be honest, even as I write that is doesn’t make much sense. It’s not like we’re saying you have to wear tight lycra pants and shoes with cleats. What’s difficult about keeping a hi-vis vest in your pannier or messenger bag? They’re light and fold up small.

Because here’s the other thing. If anything is going to stop civilians taking up cycling, it’s people on bikes being killed.