Trish made her inaugural ride on her new Gitane Organ e-bike today. For me, it was a chance to catch up with an old friend. 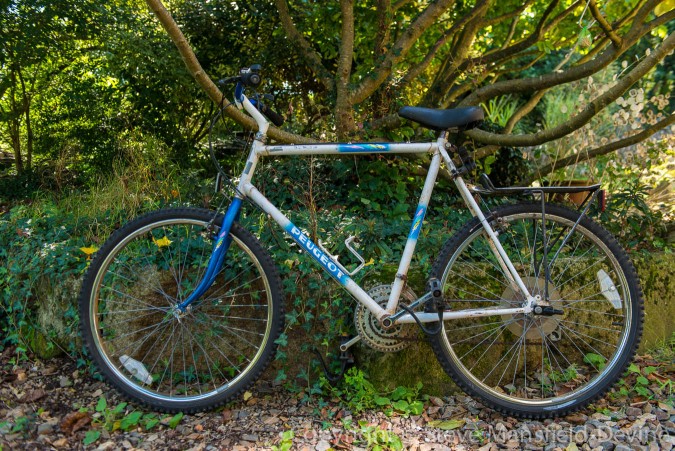 I needed something to ride. A while back, Trish bought a mountain bike, but it’s way too small. I mean, I’ve ridden it, but it’s not anything a sane person would do.

About a year ago, maybe more, we told a friend, G, he could have our old bikes, which were sitting, unloved in the barn. This was when we thought we wouldn’t ride again – before we discovered e-bikes and Dutch bikes. I’m pretty sure he never used them; in fact, a friend of his saw my old Peugeot rusting in G’s yard, took pity on it and just took it. He’s done a magnificent job getting the rust off the drive train, and it’s been used over the summer by his nephew. It doesn’t have much in the way of brakes, but I’ve always considered those a nice-to-have. We asked, via G, if we could borrow it back until my new bike arrives, and (in the light of how much work he’d done on it) he generously said yes. (It’ll be going back to him soon.)

It really was like seeing an old friend. Compared to the Dutch-style e-bikes, it’s very lean and minimalist. I pumped up the tyres a little and fitted the attachment for the DoggyHut. I made few other checks – something I would come to regret.

We set off for a favourite bit of the voie verte, part of the Véloscénie greenway that runs for nearly 80km from our local town of Domfront to Mont St Michel. This was something of a test flight for various bits of kit – Trish’s bike, of course, but also the Thule rack, the DoggyHut and, to be frank, me.

I was nervous about the Thule rack. Trish’s bike weighs 22.5kg, and even my old Peugeot is no lightweight. So there’s all that, plus the 18kg of the rack itself, hanging off nothing more than pressure on the tow hook. It boggles the mind that it works, but it does. I was very careful about keeping my speed down, though. And potholes.

We’ll write full reviews of the Thule and the DoggyHut in future posts, but suffice to say we were hugely impressed by both. The DoggyHut dismantled, to be put into the back of the car, in no time at all – and was equally fast to get rigged again. Same goes for getting the bikes on to and off the Thule. It took us 20 minutes to get ready to leave, and it was that long only because we were doing everything for the first time.

Once at the voie verte, we were all rigged and ready to go in a few minutes. Trish set off like some kind of banshee, with nary a backward glance. Cézanne and Zola, our dogs, bounded along with her. We’d brought the DoggyHut for Zola; he’s nearly 15 years old, deaf, half-blind and has a heart condition. He loves exercise, but has his limits. I know how he feels… 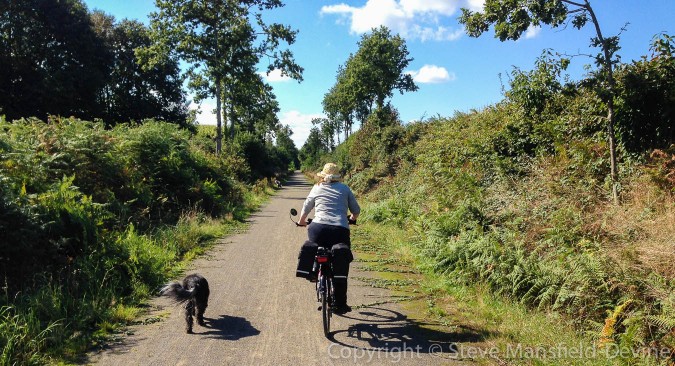 Trish on the voie verte, Zola alongside, Cézanne somewhere in the distance

Ever since ordering the new e-bikes, there’s been a nagging worry in the back of my mind – can I do this? Being fairly riddled with mild arthritis is one problem, and the other is a minor, symptom-less condition that, with over-exertion, could become ever so slightly life-threatening. I’m also up at the top end of my fifties and have an allergy to sport. Taking up cycling again seems ambitious.

I’ve done little bits of cycling lately – mostly on other people’s bikes. But never for more than five minutes at a time, if that. And even on our stationary bike, my sessions have been limited.

But on the voie verte today,  it was like I was flying – the pure pleasure of cycling came back to me in a rush. I didn’t even notice that I was hauling the (albeit empty) DoggyHut and had no brakes. 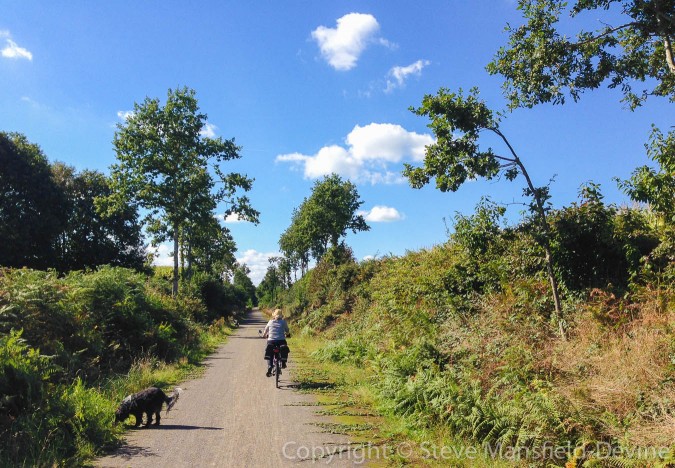 It wasn’t long before I was eating Trish’s dust

It did occur to me that I wasn’t having to do as much pedalling as I might. The word ‘gradient’ popped into my head, along with the phrase ‘return trip’. The greenways are gentle, but they’re not entirely flat.

We rode for about 5km. There were frequent stops to make sure the dogs didn’t interfere with other users of the greenway (of whom there were lots today, enjoying the fantastic weather). And we allowed Zola to ride for sections of the journey, which he did with great enthusiasm. The weeks of leaving the DoggyHut in the living room, to be used as Zola’s bed, really paid off. For him, jumping into it was a normal as jumping on to the sofa (but let’s not get started about that…) 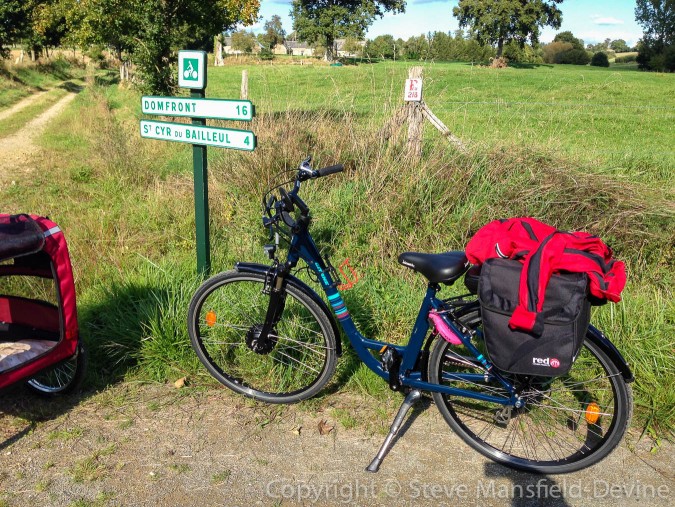 At the rest point I was feeling energised. Trish looked like she’d done little more than stroll to the fridge, even though she’d barely used the electric assist. We also realised just how useful it is having a kickstand. 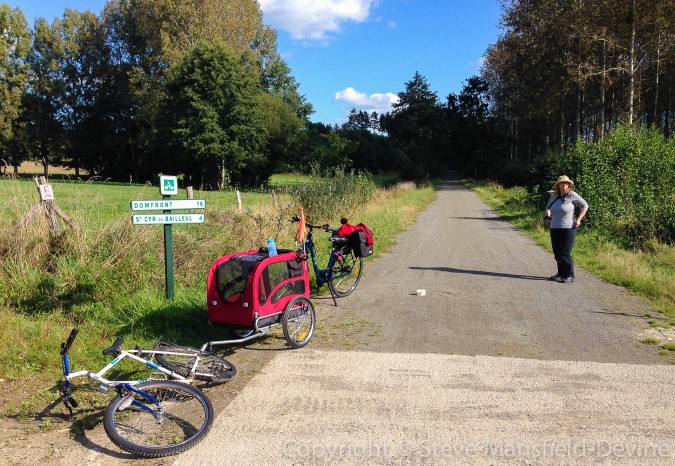 When we headed back, my suspicions about the gradient were confirmed. I started to question the wisdom of having volunteered to pull the DoggyHut, especially as Zola was getting tired and would have to be carried most of the way. I mean, Trish was on the brand-new bike with electric assist. I was on the 20 year-old rust heap with – as my knees would soon attest – a seat set somewhat too low. And I’d forgotten to bring the toolkit I’d so carefully assembled, so I couldn’t adjust it. Oh, and my bum was going numb. (Seriously, how did I ever ride this bike?)

So the last couple of klicks were a trial. But in the end I was pleased. Yes, it was only 10km. Most cyclists are barely getting warmed up at that. And it was – relatively speaking – on the flat. But it was the first time I’d properly cycled in at least 15 years, probably more. And I was towing a trailer. And a 20kg dog. On a badly-rigged bike. It felt heroic.